Note, this article is not protected from spoilers, as many elements break the spoiler policy. This article contains spoilers.

Ghostbusters: Afterlife trailers started on January 16, 2019 with the teaser.

On January 16, 2019, the Teaser Trailer was released through Entertainment Weekly. [1]

On December 2, 2019, the British Board of Film Classification published information about the first trailer. It will have a runtime of 2 minutes and 28 seconds.[2]

On December 9, 2019, the trailer was released at 6 am Pacific/9 am Eastern.[4] A German version was also released and had some new footage not in the U.S. version.[5]

On May 21, 2020, the trailer was uploaded to Regal's official youtube channel with the "Next Summer" text card replaced with the more ambiguous "Next Year" text card.[6]

On November 08, 2021 the trailer simply named "Final Trailer" was uploaded on the Ghostbusters youtube. [19]

On June 9, 2021, a 3:04 vignette titled "Passing the Proton Pack," featuring Jason and Ivan Reitman with scenes from the movie and behind the scenes footgate was posted.[20]

On November 4, 2021, a 1:10 video was posted with Logan Kim interviewing some of the new cast with some new footage from the movie being played.[21]

On September 18, 2020, Sony released a 2 minute video featuring the Ghostbusters franchise amid the company's 50 year anniversary on the New York Stock Exchange. The video included behind the scenes during principal photography and shots of a joint interview with Ivan and Jason Reitman.[24]

On September 25, 2020, Sony posted a pair of 30 second videos with Sound Editor Jessica Parks about the sound of the Proton Stream and what it invokes and editing from her dining room at home using 360 Virtual Mixing Environment.[25][26][27]

On April 22, 2021, a 45 second reaction video was posted of Ivan Reitman video conferencing Bill Murray as Murray watched the Mini-Pufts Reveal clip for the first time.[28]

On June 8, 2021, a 40 second video "HAPPY GHOSTBUSTERS DAY from Ivan Reitman and Bill Murray" was released to commemerate the start of Ghostbusters Day 2021.[30] Sony posted a 1:06 video "Designing Ghostbusters: Afterlife with the Spatial Reality Display" about how Jason Reitman and Francois Audouy used Sony's Spatial Reality Display during production on Ecto-1 and Mini Pufts.[31]

On September 8, 2021, as part of the New York Comic Con announcement, several more seconds of the Ecto-1/Muncher chase was posted.[34]

Note, some are named as best as possible and have a ^ at the end of the title inducating so.

On October 11, 2021, a 34 second clip setting up the Muncher chase was released on the Today Show.[135] Another clip was shown on The Tonight Show that overlapped with the end of the Today Show clip then showed a few more seconds of new footage.[136]

On October 29, 2021, a clip was posted at the end of The Kelly Clarkson Show featuring Podcast, Phoebe, and Mr. Grooberson trying to open a Trap with dangerous results.

On October 31, 2021, a new 10 second clip showing a little more of Grooberson's Walmart scene was posted to people who participated in the Ghostbusters Twitter's Halloween costume posts.[140]

On November 9, 2021, three new clips were released. One featured an extra 20 seconds of the clips seen on The Today Show and The Tonight Show previously.[143] A second clip featured Mr. Grooberson and Callie meeting.[144] A third clip featuring Lucky and Trevor's chat at the mine shaft seen in trailers.[145]

On November 11, 2021, a 22 second of Trevor wheat drifting was released to demonstrate the 270 degree experience of ScreenX at Cineworld.[146] A 1:28 clip was released that was a long version of the Mini-Puft reveal video.[147] 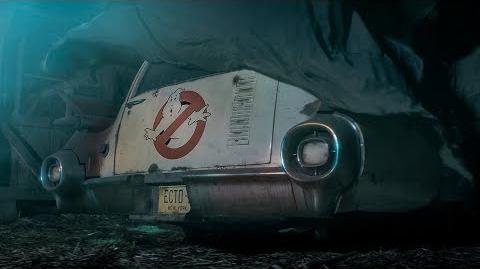 Experience 270° of Ghostbusters- Afterlife in ScreenX at Cineworld!

GHOSTBUSTERS- AFTERLIFE - Get the Soundtrack (In Theaters November 19)

GHOSTBUSTERS- AFTERLIFE - A Trade is a Trade