Ghostbusters II Trading Cards is a set of 88 cards and 11 stickers depicting photos and artwork from Ghostbusters II, produced by Topps in 1989.

There are 88 cards in the base set featuring images from the movie. A dozen of them are "Wide Screen SFX" cards depicting a special effects shot from the film in widescreen format. Two of them are behind the scenes photos showing the filming of the guys in the Statue of Liberty crown, and the guys in the river of slime subway. Finally, three of the cards feature Slimer and Scoleri Brother artwork drawn by Henry Mayo.

The base set is chased by a subset of 11 stickers. The first seven feature more Henry Mayo artwork of Slimer and the Scoleri Brothers, the following three feature photos of the cast, and the last sticker features the logo. The backs of the stickers can be pieced together to form a mini-poster.

Each wax pack contained 8 cards, 1 sticker, and 1 piece of bubble gum for the MSRP of $0.45. Each box of cards sold to stores contained 36 packs and a poster for retailers to use in their store windows.

The card backs of the Topps set were printed on gray paper, while the Australian set released by Regina had creamy-white backs - though no stickers were included in this set.[1] In Canada, the series was released by Opee Chee, as was common for card series that Topps published in the United States.

In 2011 Topps released the "American Pie" series of cards, which consists of 200 cards (in the base set alone) meant to represent American history from the 1940s to the 2000s. While Ghostbusters II is not part of the regular set, several foil-stamped Ghostbusters II "Buyback" cards were randomly inserted into the set (1:24 Hobby packs, less Retail). The buybacks are cards from the original series with a small "Topps American Pie" logo foil-stamped onto it. It is unknown just how many Ghostbusters II buyback cards there are.[2]

To celebrate the company's diamond anniversary in 2013, Topps released a "Topps 75th Anniversary" trading card set containing reprints of cards from the various non-sports card series the company has released over the past several decades. In addition to the base set of 100 cards, there are autographed cards and parallel variant sets. Ghostbusters II is represented by Card #92 (a reprint of Card #88 from the original set), and an autographed Ernie Hudson card (a reprint of Card #7 from the original set). The "Pop Culture Autographs" are not strict reprints; the original cards are done as a card reprint on the top portion of the card with the signature (which is on a sticker) underneath. The end result looks similar to a matted photo that has a signed index card underneath. Each of these two cards exists in three variants: regular (white background on the Ernie card), a Rainbow Foil background (150 per signer), and a Diamond Anniversary sparkle background (75 per signer). Every box also has one Stamped Buyback, a card from one of the original series with a small foil addition noting it as a buyback. Several Ghostbusters II buyback cards are available, though it is unknown is they are random assorted cards or an actual set. The following Ghostbusters II buyback cards have appeared on a popular auction site: #2, #26, #44, and #75.[3]

Straight on photo of the box

Regina Card Box (Australia)
Add a photo to this gallery

Buyback Sticker #5
Add a photo to this gallery 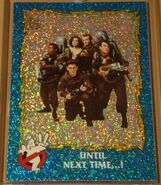 Buyback Card #75
Add a photo to this gallery

Non-Canon Cameo in Ghostbusters Volume 2 Issue #11
Add a photo to this gallery
Retrieved from "https://ghostbusters.fandom.com/wiki/Topps_Ghostbusters_II_Trading_Cards?oldid=179429"
Community content is available under CC-BY-SA unless otherwise noted.