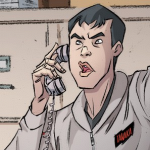 I am a long-time fan of the franchise - the movies that started it all, to the cartoons, the comics, and the video games. My primary interest in Ghostbusters is in Tobin's Spirit Guide.

I am a Bureaucrat (2nd in Command) Administrator for this wiki starting September 30, 2015.

My current long-term project for the wiki is working on IDW Comics content, specifically the monthly ongoing series, mini-series, and annual. I also oversee the Ghostbusters Timelines project. I am currently working on adding more full references and images to The Real Ghostbusters content. Outside of the wiki, I have transcribed scripts of the two main versions of Ghostbusters: The Video Game (Realistic and Stylized Versions) and Ghostbusters: Sanctum of Slime. They are available to read and download at GameFaqs and I also scanned my copy of Making Ghostbusters for the free digital version provided by Spook Central.

I have made cameos in the Haunted America arc of the IDW ongoing series in the first panel of page 15 and 16 of Volume 1 Issue #9 as one of the army ghosts (see my avatar). I also appear on one of the Issue #9 RI-B covers for Ghostbusters Fans. In the right side of the background, I am holding a copy of Tobin's Spirit Guide. I have been referenced on page 14 of Volume 2 Issue #13 on Dana Barrett's white board as her cello student and on page 20 of Volume 2 Issue #17 on a toy model box on top of the foot lockers. On page 22 of Ghostbusters International #1, in incident detail section of the Spectral Incident Report, the agent who take witness statements, Special Agent Tanaka is named after myself. First appearing on page 7 of Ghostbusters International #3, in panel 7 is Kevin Tanaka, who now works on the Ghostbusters' staff, is visually based on me. In Ghostbusters 101 #2, Kevin Tanaka's bio on the Dramatis Personae mentions he has "superhuman attention to detail" - a nod to Mrmichaelt. Kevin's civies were chosen by Mrmichaelt on January 20, 2017. As of Ghostbusters Crossing Over Issue #5, Kevin sports a red shirt. The color was chosen by Mrmichaelt on June 6, 2018. It is "High Risk Red" or Pantone Color Code #18-1763 TCX.

Retrieved from "https://ghostbusters.fandom.com/wiki/User:Mrmichaelt?oldid=170101"
Community content is available under CC-BY-SA unless otherwise noted.