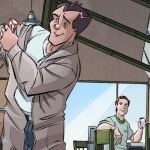 I'm not sure what to say here. I've been a Ghostbusters fan since childhood, likely seeing The Real Ghostbusters first, and then the first movie on ABC, and the second movie in the theater.

I've been editing here on the Ghostbusters Wiki since September 2012, and was promoted to Administrator status three years later in September 2015.

Retrieved from "https://ghostbusters.fandom.com/wiki/User:Spookcentral?oldid=175012"
Community content is available under CC-BY-SA unless otherwise noted.